2017 was one heck of a year for JC Social Media. Not only has our team grown in size, but we’ve also gained some great new clients and won a national award. Not that we like to show off…! It’s been an exciting year for social media too, where memes continued to dominate our timelines, stories took over and character limits increased.

We thought it was only fitting that we take a look back over the last year.

Though it now all seems like a distant memory, January 2017 gave us great content and unforgettable memes. You might have forgotten a few but that’s what we are here for!

We’d like you to cast your carnivorous minds (sorry vegans) back to Salt Bae. How could you forget him?! Not only did he expertly sprinkle salt, he also became a viral sensation adding sass and a little something extra to everything from exams to Disney Channel magic. 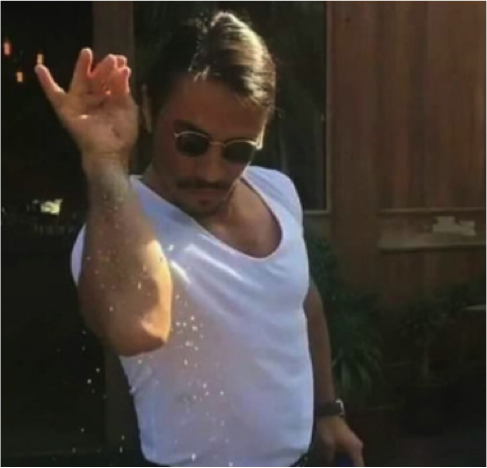 Moving away from magic and more to mischief now. Who remembers Danielle Bregoli? Not ringing any bells? Well then, you can ‘cash me outside, how ‘bout dah?’. The troubled 13-year-old wreaked havoc on more than just her neighbourhood when she entered our timelines in January after appearing on Dr Phil. While social media mocked her, turning to her accented catchphrase to air their frustrations, Danielle went on to become a rapper – we’ll let you be the judge of that one… January was also the start of a great month for JC as we began working on the BEDSAs (British Ethnic Diversity Sports Awards) campaign which we later went on to win an award for.

Ah, February, the month of love and some pretty amazing memes. Make way for blinking man! 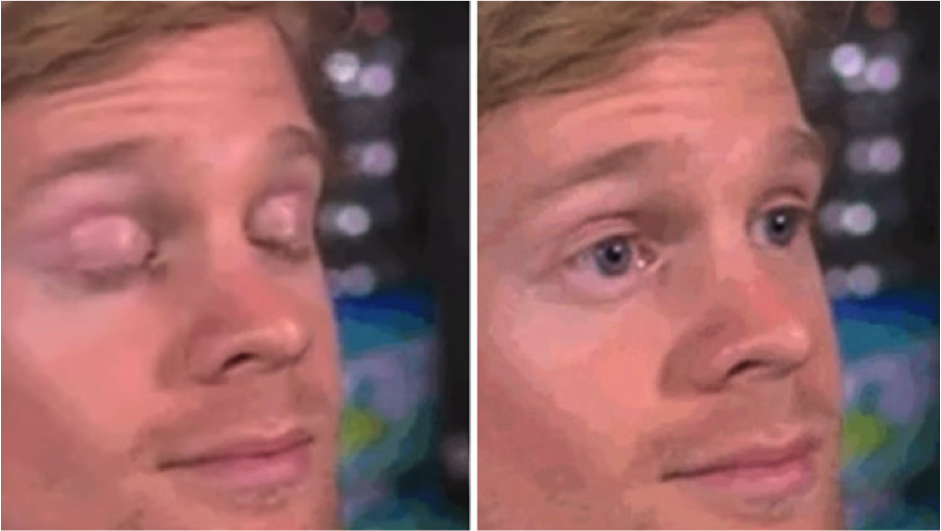 Has there ever been a better way to convey shock and disbelief? We think not. In fact, while we’re on the subject of thinking, allow us to remind you of this guy, who is either a genius or just plain stupid. Either way a great meme! 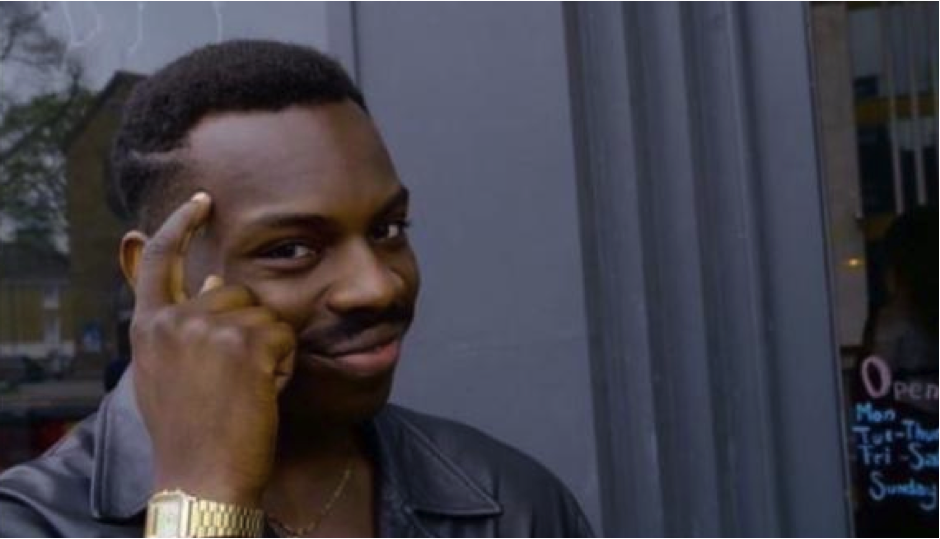 March:
In the third month of the year we took on a daring, death-defying treasure hunt around Birmingham city centre, courtesy of Freax Adventures. The augmented reality adventure saw us help a friendly goblin open a number of magical portals using crystals we found by completing different challenges! 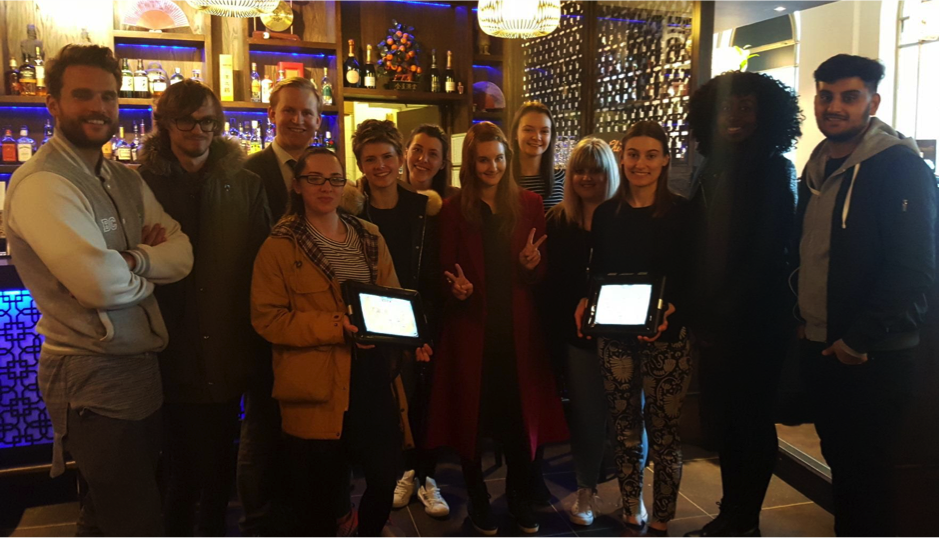 In March, Meryl Streep became the meme queen starring as the backup singer we all wanted and desperately needed. Whilst Donald may think Meryl is overrated, we beg to differ, since this meme brought us nothing but sheer joy in 2017. Is there any song Meryl doesn’t know the words to? 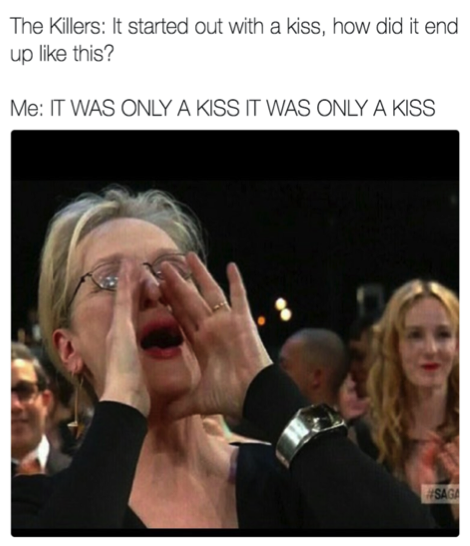 Our David also had a pretty great month too after he was nominated for Birmingham Young Professional of the Year in the marketing and communication category. But more on that later.

Welcome to your tape… only joking, it’s 2017 and we’re a social media agency we don’t use tapes or paper. The ‘welcome to your tape’ meme found its fame following the hit Netflix show, ‘13 Reasons Why’. A show about a girl who commits suicide, leaving behind tapes explaining why. It was perhaps one of the more controversial memes of the year as some felt that it made light of suicide.

On a lighter note, we saw Carter finally get his nuggets after the tweet featuring the hashtag #NuggsForCarter went viral. Most impressively, Carter actually broke a record for the most retweeted tweet of all time, beating TV host Ellen DeGeneres’ Oscar selfie.

Back at JC, we had some good old-fashioned fun by taking part in The Mighty Quiz of the Year at Chung Ying Central. The quiz was in aid of Alzheimer’s Research UK and included everything from a musical round to a planking competition (which Ben won!). The final round saw us build the Floozy in the Jacuzzi out of tin foil – some were more creative than others… Sorry Natalie! Moving swiftly along, SpongeBob Squarepants and his bikini bottom friends once again took their rightful place at the forefront of the meme world. In May, ‘Mocking SpongeBob’ appeared on our timelines and gave us even more reason to be sarcastic on social media.

As we mentioned back in February, our David was nominated for Birmingham Young Professional of the Year 2017. Being the supportive team we are, we went along to the awards with him (nothing to do with the free dinner, we promise, David). 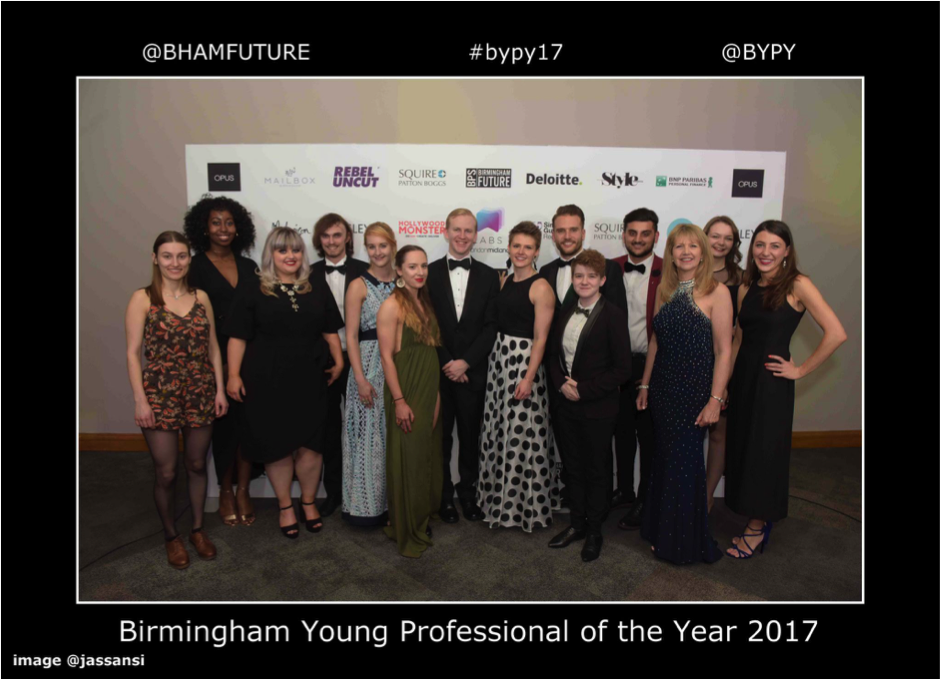 While he didn’t go on to win the award, he’s certainly a winner in our eyes! What an amazing achievement to be nominated among such an inspiring group of people, so a huge well done for that, David. We are so proud!

As we welcomed in the summer, we of course welcomed some new memes. Firstly, ‘the floor Is…’ meme. Bringing back the childhood game of ‘the floor is lava’ and replacing lava with, well, just about anything. To jog your memory here’s an example: Perhaps the weirdest meme of 2017? The Gay Babadook. For those of you unfamiliar with the Babadook, it originated from a horror film. However, after Netflix accidentally filed the flick under LGBT movies, they unintentionally created a gay icon and meme. JC turned 6 years old in July and to celebrate, we hosted a party at Chung Ying Central. There was networking, prawn crackers and some excellent – albeit slightly radioactive-looking, green cocktails. It’s one of our favourite times of year and we love getting together with our clients to celebrate and reflect on just how far JC has come! 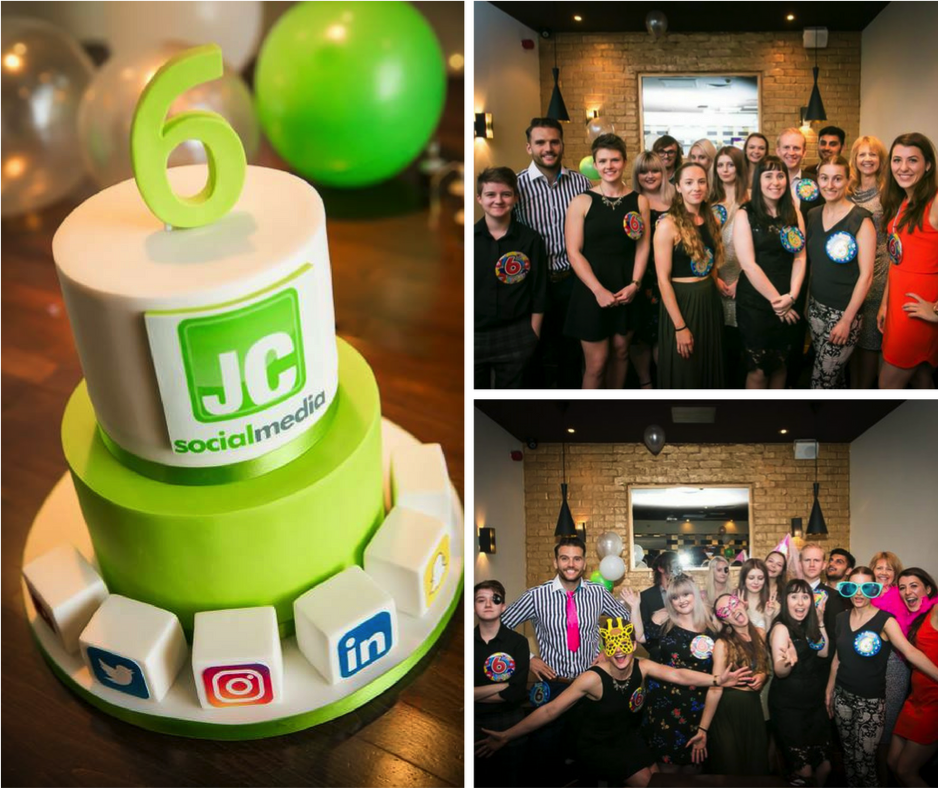 Over in the world of social media, we were all going crazy over a dancing hot dog. We know that sounds crazy but it is true. The little guy you see below took over the internet after making his first appearance on Snapchat and continuing his great adventure onto Facebook, Twitter and Instagram. In August, David started the debate to end all debates: should emojis be used in work emails? Appearing on Good Morning Britain, he went head to head against… Jeremy Kyle, who was completely opposed to the idea. We, however, think there is nothing wrong with the odd smiley face in an email! ☺ 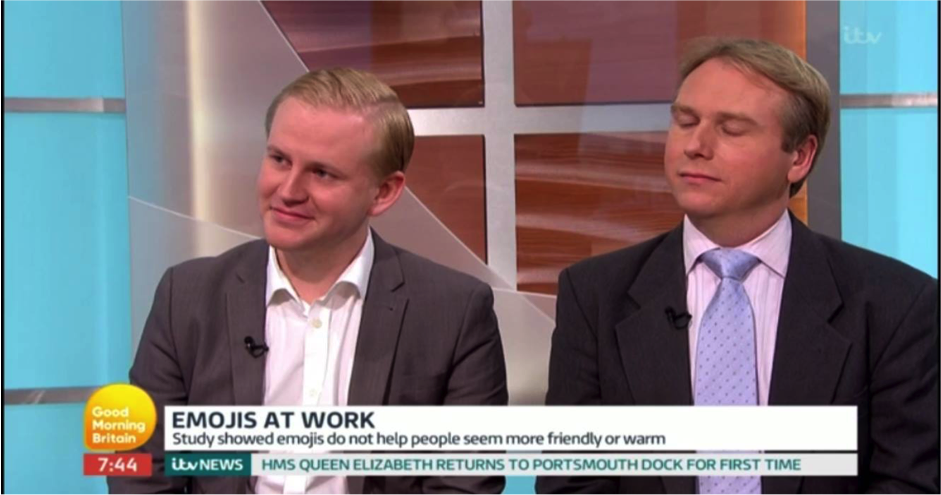 One of our most successful JC Facebook posts happened on arguably one of the best days of the year, National Dog Day. As a team of animal lovers, we decided to get involved and had a ‘dog-off’. While there was a clear winner, we do think there might have been a little cheating!

Back over the on the internet, we were all shocked by the ‘distracted boyfriend’, a stock photo showing a man with wandering eyes. We see lots of stock images every day, but we must admit this one got us talking in the office too! The plot thickened when a series was discovered, delving deeper into the story.

While September might have been relatively hot, mans was not. The rap ‘The Ting Goes’ by Michael Dapaah, otherwise known as Big Shaq became a viral sensation for his hilarious gun-like noises and his ability to do quick maths. 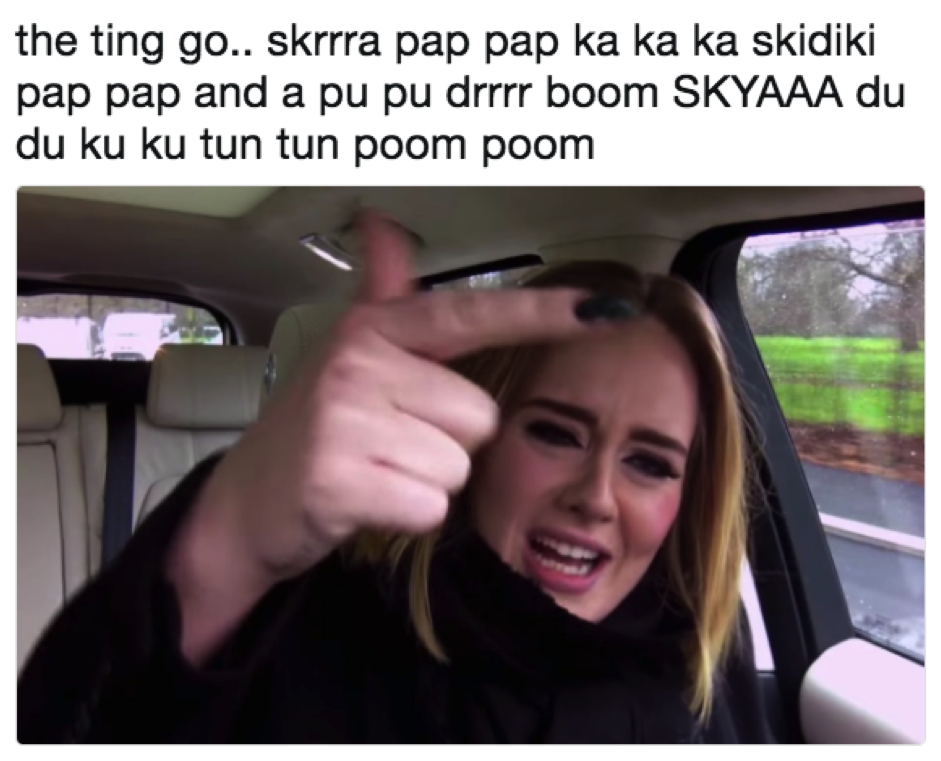 Our David also had another award nomination, this time from Future Faces, of the Birmingham Chamber of Commerce. He’s had a pretty good year this year, we have to say!

In anticipation of Elf on the Shelf, the world began a rhyming game by putting two and two together and making sure they both rhyme. It was that simple! So, with that said get ready for…

First of all, (do you see what we did there?) 2017 went far too quickly! October was a great month at JC and we had lots of fun. Not only did we get involved in Pink Day and raise some money for charity in the process, we also challenged ourselves to escape the room! Halloween is our Tara’s favourite time of year so to celebrate we decorated the office with spooky paraphernalia. On the day itself, we all dressed up (some of us more than others)!

The cat costume was clearly a popular choice. 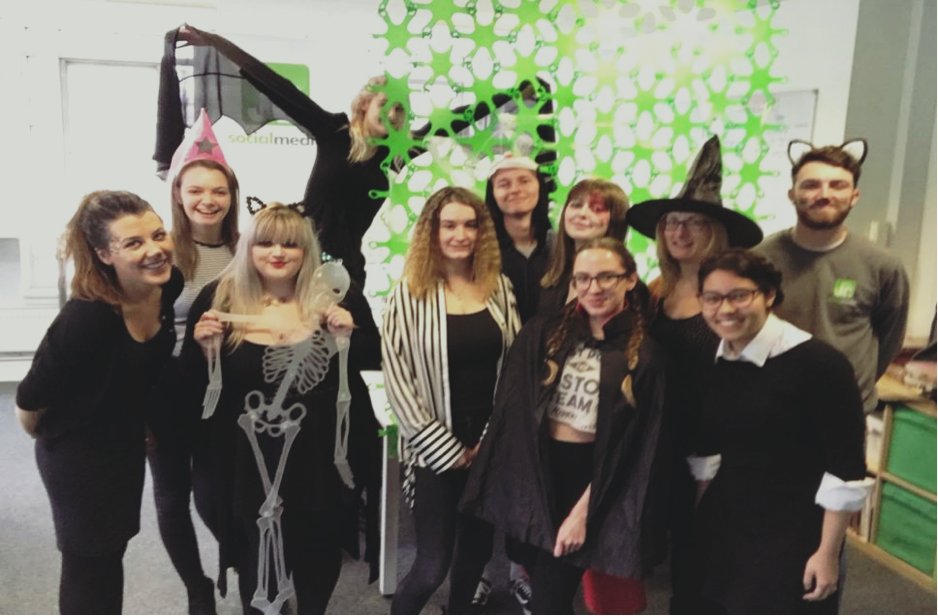 Speaking of Halloween costumes, the meme of October 2017 was ‘couples Halloween costumes’ which was pretty much a rehash of the ‘name a more iconic duo’ meme. However, that didn’t stop it giving us some laughs. We were also lucky enough to get even more award nominations and were shortlisted for three categories at The Drum Awards:

– Social media agency of the year
– Social media campaign of the year, for our work with The British Ethnic Diversity Sports Awards
– And our very own head of training services David Glenwright, was nominated for the rising star award.

November was a revolutionary month, with Twitter finally caving in and giving users what they have been asking for years: more characters. Sorry Kimmy, still no edit button!

The powers that be at Twitter’s headquarters doubled our character limit, taking us from a measly 140 characters to 280 characters. The change was a part of Twitter’s plan to attract new users and increase growth and it certainly was a welcome change, as users made the most out of their new-found characters. We were also a finalist in the national British Chamber of Commerce Awards, and we went on to win Best Use of Social Media! David picked up the award with a full Movember moustache! December is the season of giving and we like to give back wherever we can here at JC. So this year, we decided to join in with the secret santa campaign run by Love Brum and all packed a bag filled with supplies for those without a home on the streets on Birmingham.

Not wanting to miss out on presents we held our own secret santa in the office – some of us are better than keeping a secret than others (you know who you are!). We were all happy chappies and shared smiles all round as we opened our gifts and guessed who our santa was. It’s definitely not as easy as you might think!

As most offices do, we look forward to our Christmas party each year and 2017 did not disappoint. This year our team headed to Edgbaston Cricket Ground for an 80s, 90s and 00s themed night. We danced, sang and laughed the night away and are already counting down the days until we can book the next one! To end the year, we held our annual strategy meeting; talked about our plans for JC’s future and reflected on our success and achievements of the past year.