China Red Mist – What happened to China Red in Birmingham

on Jan 22, 2013by The Social Mediatorin Blog, Social media

A good friend was kind enough to share her recent experience with a certain ‘boutique nightclub’ in Birmingham city centre. She had experienced a slight altercation with their social media management over Facebook. Thankfully a screen-capture followed by a Facebook post and Tweet shared the lack of online customer service she received.

What happened to China Red in Birmingham?

The background: China Red had proudly announced that it had recently undergone a refurbishment of their venue. They were so pleased with the results that they felt it necessary to tell Facebook. And why not? They’ve invested in their club and they need to maximise their return. Let the masses know! Good marketing.

Miss R, whose identity is known to many but kept a secret in this piece, posed a very straight-forward question to the page in response to the statement. Something along the lines of “Have you refurbished the toilets?” Now, you can interpret the question however you like and attempt to decipher its tone. Of course, over social networks (other than YouTube etc.) tone is only ever inferred and interpreted. Regardless, Miss R has simply raised a question over the state of the club’s toilets. Of course, nightclubs are, indeed, infamous for the state of their restrooms, both male and female. Here is their response: 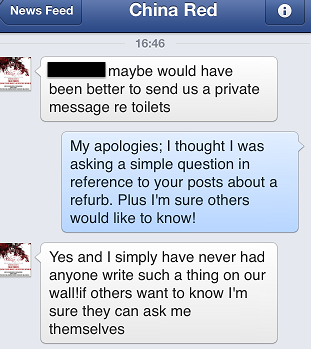 Rule one: Accept that no one is going to send you a private message. This is the 21st century and everyone has the right to write whatever they like about your business, let alone, ask a question about it. Please don’t be shocked that someone has posed you a question over your Facebook page. Yes, in public.

Rule two: Every individual client is valuable and their opinion is important. In fact, Miss R has not actually offered her opinion on the state of the club’s toilets but let’s assume she does not find them to her satisfaction. Remember, if you offend one person, it is highly likely that they’ll not use your business again, they won’t take their friends and their friends won’t take theirs, etc.

Rule three: If one client doesn’t find your loos satisfactory, the likelihood is that any number of your clients will share this opinion. This means the issue must be dealt with to avoid mass backlash from everyone who agrees with Miss R (even though her opinion is still only inferred at this point). 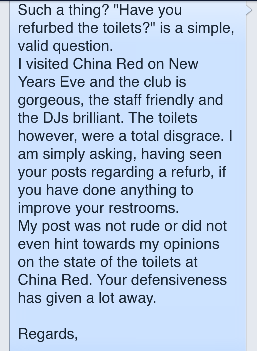 So they’ve gotten off on the wrong foot here and it’s not going to end well. Here is what Miss R had to say (right).

You can see that Miss R is actually very pleased with the experience she’s had at the club – she’s the ideal client and almost perfectly happy!

Before we see how the situation was resolved; let’s analyse China Red’s alternative responses.

Now, let’s suppose China Red has not refurbished its toilets – worst case scenario. They are in a bit of a sticky situation; maybe like the toilets. They have a few options:

Good thinking but obviously just delaying backlash from those who find out the toilets are still sticky.

2. Tell them when – “We’re still in the process of improving our bathroom facilities and we’re doing our best to keep them up to our clients’ highest standards. Thank you for your question and we are looking forward to the imminent refurb!”

Better; polite and sends a clear message that they realise improvements must be made to keep their valuable clients happy. They’ll need to get a move on to avoid disappointment.

The choice of any number of social media managers. This is a risk. There may be no interest in the question and this could be the last they hear of it. Alternatively, more like posts will be made and the situation made worse.

If China Red has actually managed to refurbish its toilets, regardless of whatever state they were in before, the response is easy. The question posed by Miss R really works to their advantage.

“Thank you for your question, Miss R. We are pleased to say that we have fully refurbished our toilet facilities and look forward to welcoming you on your next visit.”

They could even go so far as saying that “We realised that they were an issue for our clients, we listened to them and we’ve made the improvements we needed to.”

Brilliant! We’re the club of the people. We spent thousands of pounds putting right what had gone wrong and we can now shout about our wonderful washing facilities. Our clients will wish they had these marble-effect basins at home, and a Dyson Airblade hand dryer to boot.

Everyone’s a winner. Miss R is going to be there in the coming weeks and all their Facebook fans can rest assured they won’t have to ‘feel the burn’ hovering a squat over the loo seat. There might be the odd “Yeah, the toilets were disgusting” but those days are over!

Of course, this isn’t what happened… 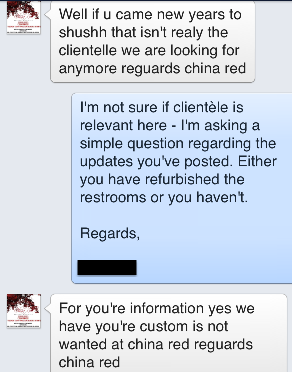 So they had refurbished the toilets! Unless they decided that they had to lie about the restroom refurb, why didn’t they just say so? They’ve also begun questioning whether 90% satisfied, money-spending Miss R is the type of client they’re looking for. Interesting social media strategy. Miss R is chuffed to have got the answer she’s been seeking: 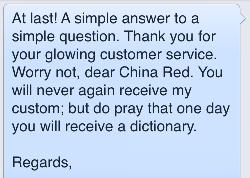 Rule four: If English isn’t your mother tongue, or if it is but your spelling and grammar are as appalling as this, do invest in a dictionary as Miss R suggests. Or even just Google the word; that’ll put you straight.

I’ll leave you with the final exchange. China Red eventually had to delete their Facebook page. Miss R isn’t returning any time soon. And by the way;

Rule five: Don’t tell your clients to “piss off.” 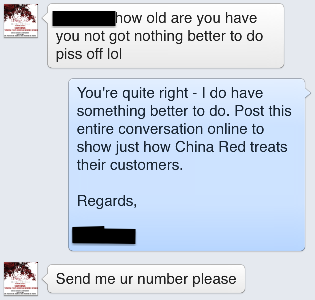