A question posed in my BYPY2014 interview was: what do you do in your spare time and how do you relax?

My answer – exercise! I’m a huge believer in maintaining a healthy body and a healthy mind, not only to release adrenalin and tension, but also to make friends and push myself mentally and physically. Entrepreneurs and young professionals often work ridiculously long hours, so it’s important to balance this with some downtime. For me, sitting still and watching TV is too boring – I actually find it quite frustrating, so I’m constantly looking for stimulation and relaxation in the form of exercise.

My current focus is weight lifting – working on my chest press, deadlift, shoulder press and squat. My deadlift currently stands at 100kg and I’m hoping to increase this by the end of 2014 (and now I’ve written it here I’m accountable to all of you!)

This is a guide for anyone who wants to be more active, to some of my favourite places in Birmingham to get a sweat/pump on.

My general rule is that a gym isn’t a gym without a squat rack. Ultimate Fitness is a great gym that’s been open since 2012 based on Upper Gough Street near the Mailbox. Run by a couple named Magda and Si, they know their stuff when it comes to nutrition and lifting weights. Don’t let the posters on the walls scare you off, the gym is a friendly place and there’s always someone you can ask for advice if you don’t know your single arm row from your skull crusher.

The QAC Fitness Centre is in sunny Harborne tucked away behind Lordswood Road. The best thing about this gym is Questa the crazy guide dog who will bound up and greet you. Second best is the selection of free weights, along with the very friendly atmosphere and real mix of interesting members.

Amazing for a core, shoulder and back workout, Birmingham Bouldering Centre promises an afternoon of fun for beginner and intermediate alike. I last visited here with the most competitive man in the whole world (Andrew at Scorchsoft), who proceeded to act as an adjudicator of the whole group’s climbs and made sure we were sticking to the correct colours (the walls have various different coloured routes for differing levels of ability boulderers). The best time to go is a weekday daytime, so pop your ‘out of office’ on and get down to the Jewellery Quarter.

I recently went to Barcelona and saw some fantastic street dancers, who I later discovered were dancing the lindy hop. This swing-based dance is taught weekly in Kings Heath and is brilliant fun, Once you’ve got the basics mastered you can quite quickly incorporate some impressive moves in. Either take a partner or meet one there. Lindy hop down Broad Street, anyone? 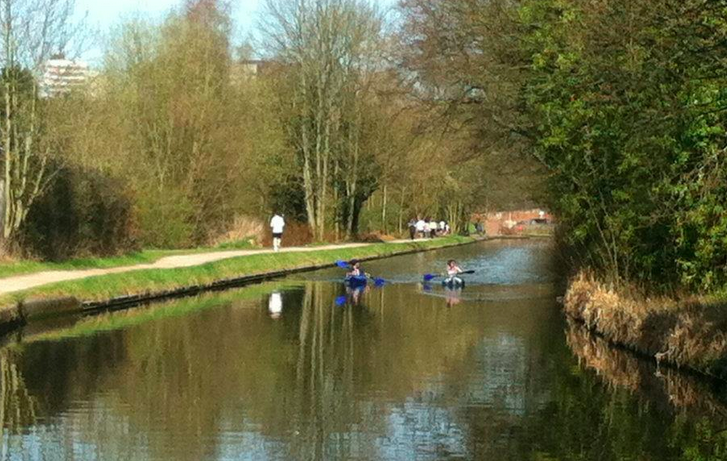 This wouldn’t be a guide to fitness in Birmingham without mentioning our canals. (More miles than Venice, don’t you know?!) Go for walks along them, go for bike rides along them, go for runs along them. Best thing? It’s free! My personal favourites are weekend morning walks up to the Vale in Edgbaston and walking via Brindley place up to Newhall Street then heading to the Jewellery Quarter for an Urban Coffee green tea (wild, I know).

Want more than a walk? Race a canal boat. They only tend to go around 4 miles per hour which is the equivalent of a fast walk, so run along past one and you’ll feel like a superhero. Once you really get the bug for running along the canal you could enter the Birmingham Black Country half marathon, which goes from Wolverhampton to Brindleyplace and is a great route for first-timers as it’s so flat. The best bit? Being cheered on by the NIA as you cross the finish line. The worst bit? People chilling in their canal boats holding up mile markers for you as you puff and pant along. Don’t give up!

With an abundance of canals and open spaces comes an abundance of organisations set up to utilise them – hooray! BRAT Club (which stands for Birmingham running, athletics and triathlon) is one of the best triathlon clubs in the country, having trained up some incredible ironman athletes (including Chrissie Wellington). They meet for long runs (around 8 or 9 miles) on Monday at 7pm at the MAC, Cannon Hill Park, then at the University of Birmingham for hill training on Wednesday, then if you’re super keen you can attend the Saturday morning training AND the Parkrun – both at Cannon Hill Park. That’s the running side, then they organise weekly swims (open water and in pools) plus bike rides. You’ll be triathlon champion in no time!

Hopefully that’s given you some ideas on how to get active in Birmingham. Any suggestions for more great places to exercise? Please add them in the comments below.