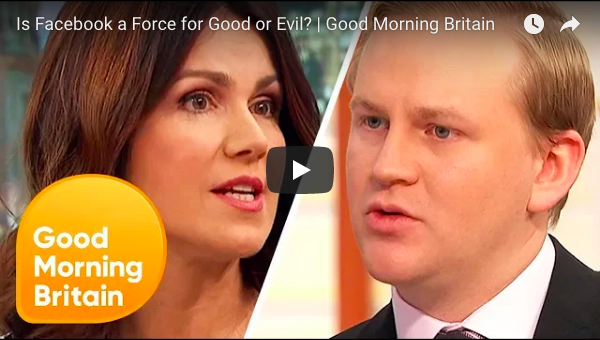 On Tuesday, 20 March, I had the great pleasure of being invited back to ITV’s Good Morning Britain, to once again appear in a live debate. Having previously put the issue of emojis in work emails to bed, I was this time asked to appear in a discussion around Facebook and its use of personal data, in light of the Cambridge Analytica story that has surfaced over the last few days. Being a live debate, time was limited, which was a great shame as both myself and the other panelist, Jennifer Lorimer, had plenty to say on the matter. So, here are my additional thoughts on Facebook and what it does with our personal data.

That’s not to say that Cambridge Analytica legally acquired the information. If the allegations prove to be true, then the app in the middle is guilty of breaching Facebook rules and using data in a way that the users did not consent to.

It does bring us to the first main issue, however – that the data was, in the first instance, acquired with consent. The app that gathered this data provided a psychoanalysis profile of users, based on their social media activity. When users signed up to the app they were presented with a screen explaining what data was being gathered and for what purpose. At that point, the user would have clicked accept, almost certainly without actually reading what it is that they were accepting.

Ts&Cs fatigue is a growing issue. We’re constantly being asked to give consent for things when online, and it’s reached a point where we simply aren’t bothering to reach what it is that we’re agreeing to. If you use Facebook, then you give advertisers permission to target you based on your behaviours, your actions and your interests. The advertiser will never know your identity, but if Facebook knows that you’re a fan of Italian food, then Facebook is going to help Italian restaurants put their content in front of you. And you’ve given consent for that to happen.

This leads neatly on to the second issue, the impact that social media is having on mental wellbeing, particularly in children and teenagers. Multiple studies have presented findings that suggest there is a correlation between social media usage and increases in anxiety, depression and poor sleep habits, and it is something that is indisputable. A young person sees the heavily filtered and edited ‘perfect’ life of a friend presented on social media, and they compare this fallacy with their own real life. The problem is that they do not know this other life is a lie – they believe that the comparison is fair and balanced.

Once again, education is critical here. Facebook has a huge social responsibility and is doing work to educate young people in being aware of what they see online, but the platforms cannot bear sole responsibility. Social media safety and awareness should be part of every child’s education now, with schools and parents working together to ensure that children are not only safe but consciously aware of the context of what they see.

That’s not to say that social media is entirely bad for young people. In 2017 the Royal Society for Public Health released a study (which includes contributions from our MD Jodie Cook) that revealed that nearly 7 in 10 teens reported having received support on social media during tough or challenging times. Social media has and always will at its heart be about communities. These online communities can often be a lifeline for individuals who feel isolated for one reason or another – social media gives them an opportunity to share experiences with those who can empathise, to ask advice, and most importantly to feel a sense of belonging. Used in the right way, Facebook and other platforms can be a real force for good, and to try and scare young people away from these sites is to potentially deny them access to a valuable community.

The final issue that was touched on in the debate is the way in which Facebook could be harnessed as a means to influence the decisions of individuals when it comes to elections or referenda. The argument here is that the Trump Campaign (among others) was able to use information scraped from Facebook to understand issues that matter to people most, and then deliver targeted messages to those people based on that information in order to influence that vote. I have seen mass outrage at this concept online, with people referring to “the weaponisation of social media”, and to be honest, I really don’t understand the issue. I don’t understand it because it’s a principle that is not new – not by a long shot.

I remember a contentious issue in Birmingham a few years back around the introduction of fees for the collection of garden refuse – the ‘garden tax’ as it was quickly dubbed. I at the time lived in an area of the city where most properties had a garden, whereas a friend of mine lived in the city centre where there was hardly a flower to be seen. During council elections that year, I received flyers in the post and had candidates on my doorstep wanting to talk to me about fighting the garden tax. My friend didn’t hear mention of garden waste collection once.

The political parties had segmented the population based on who had gardens and who didn’t, and delivered campaigning messages that were targeted and relevant. Are they guilty of using the knowledge that I have a garden to try and influence my vote? Or are they simply looking to engage with constituents on issues that matter most to them. Using the information gathered by social media is the exact same principle, just on a bigger scale – they’ve digitised door knocking.

So, is Facebook (and by extension social media) a force for good or evil? It’s a complex issue, not least because Facebook itself is neither – it is a tool. It is a platform that has and continues to provide so much for so many, and it has for the most part done some amazing things, whether it’s helping someone stay in touch with their grandkids on the other side of the world, or presenting someone with information that is of genuine relevance and interest to them.

Yes, there are those who would seek to manipulate the platform for their own benefit, and work to combat them is constantly underway, but is that a reason to give up on the platform? Absolutely not. Facebook has given us so much already, but it still has a lot more to give, and I for one can’t wait to see what’s next.