How to cover the whole UK with a geocode and radius

What is the geocode and radius you need to cover the whole UK?

You will need to know this for using something like Hootsuite Twitter searches for a company whose target audience is the whole UK but not beyond. This is something we do for many of our clients but too many social media managers lump for the centre of Birmingham and set a 200-mile radius to cover the whole of the UK.

What’s the problem with this? 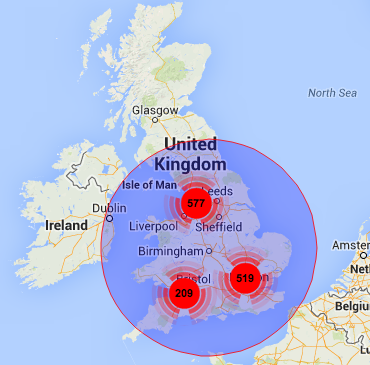 Okay, not too bad, but you’ve missed out virtually the whole of Scotland and Northern Ireland. Dublin has just sneaked in there. With this geocode and radius (pictured), you’re missing out around 2 million people just in the greater areas of Glasgow and Edinburgh and the population of Northern Ireland (around 1.8 million) and the whole of Ireland except Dublin (which might be a good thing depending on the nature of your business).

So why don’t I just set a 300-mile radius with the same geocode?

Because even with a 200-mile radius, you’ve reached mainland France. A 300-mile radius will put you well into France, Belgium and the Netherlands – again this will depend on your business and goals but you’re potentially going to get a lot of results from outside your target market! As soon as you venture into Europe, we hit a very obvious language barrier but, more importantly, a cultural and business barrier.

In terms of your business, you may not be able to (or want to) trade with Europe and picking up accounts in Belgium and the Netherlands is very counterproductive. This is because they regularly speak (and tweet!) in English but often in a slightly different context to what we would expect. The combination of these two factors means you will have a lot of results you can do nothing with and, ultimately, waste a lot of time sifting through.

Okay, I get it, so where should I use? 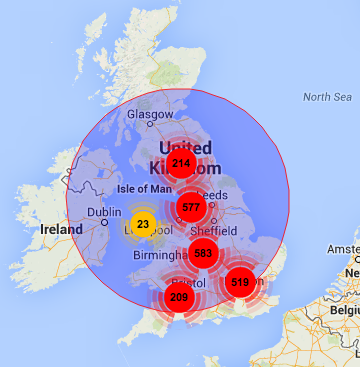 There is a lot of debate about where the centre of the UK is but we don’t care about that and neither do you. You need to set your centre point as Blackpool. Blackpool? Yes, or Liverpool if you’re less bothered about northern Scotland and more bothered about southwest Ireland. The image shows coverage from Blackpool with the same 200-mile radius. This demonstrates how much more central Blackpool is in terms of the whole of the UK and Ireland. Of course, we still haven’t nailed the south coast and southeast so adding 25 miles will have you covering virtually all of the UK population without hitting mainland Europe.

Bookmark this page for future reference – this is very important for companies isolating the UK only!

For monthly social media hints and tips sign up to our newsletter here. Find out more about Twitter for business.