How JD Wetherspoons missed the marketing opportunity of a generation

Thinking about closing all of your social media accounts? Go out with a bang and leave a legacy. Don’t limp out citing trolling or the fact social media doesn’t contribute to the business. That’s failure.

In April 2018, pub giant JD Wetherspoon tweeted the following statement to their followers: 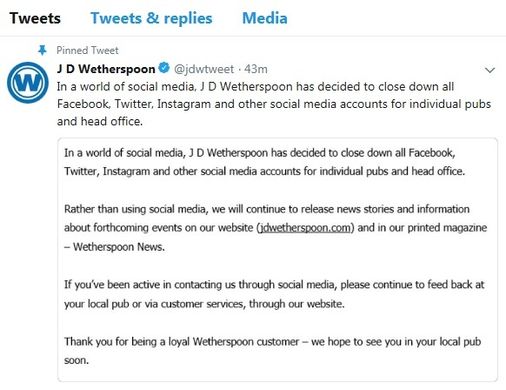 True to their word, they proceeded to delete the social media accounts of all 900 of their pubs.

There has been speculation about exactly why they took this decision but, overall, it was met with a negative response. Customers of Wetherspoons felt that the brand no longer cared about them – about their feedback and having a two-way conversation.

However, in this pseudo-PR-stunt that ironically blew up over social media, the brand missed a huge opportunity to make a real statement to society about socialising and social media.

Pubs are for socialising. Pubs are for relationships, friendships – eating and drinking with people you know well and are yet to know well. That is what the brand represents.

Although the chairman, Tim Martin, apparently said this:

It’s becoming increasingly obvious that people spend too much time on Twitter, Instagram and Facebook, and struggle to control the compulsion… We are going against conventional wisdom that these platforms are a vital component of a successful business.’

…they failed to spread this ethos and make the connection in their statement. The company could have sent a powerful message about social media and the fact that it should support and enhance social relationships; not replace them. Their message sounded defeatist.

Instead of the self-centred and corporate message JD Wetherspoon sent before leaving social media; I would have recommended the following:

At JD Wetherspoon we prize, above all else, your company in our venues. We are proud to celebrate your birthdays, host your catch ups and serve your family Sunday lunch. Our focus is on personal, face-to-face relationships. No matter how great social media is, it can never replace those priceless moments.

We’re working on passing the savings we’ll make onto customers and, as a start, if you come into any JD Wetherspoons in April, we’ll give you 10% off your bill if you quote “social; not social media”.

This would have achieved three things:

Perhaps they did need a social media agency, after all.

And here’s how social media can actually be used for pubs and bars.