Founded over a decade ago, Pinterest one of the original powerhouses of the social media world. However, many brands have been reluctant to create and maintain a presence on Pinterest compared with other networks. It’s certainly not a behemoth like Facebook or Instagram, but it is comparable in size to Twitter, which forms part of most brands’ online strategies.

Of course, there is an obvious B2C vs B2B argument here with most people determining Pinterest to be a more suitable habitat for consumer-facing brands. However, as we’ll see, there are elements of the platform that make it valuable and a far easier platform to manage, whatever your business. Let’s check them out.

Okay, so we’ve got nine juicy reasons to give Pinterest a real go this year. Number three is the real kicker in the social media management equation!

Pinterest has over 330million monthly active users, which is about the same as Twitter and around 10% more than LinkedIn. Unlike Twitter and LinkedIn, however, it’s rarely discussed as one of the major social networks, probably owing to the fact that celebrity announcements and breaking news don’t tend to be shared on Pinterest. However, the user data and growth figures show Pinterest is a hugely relevant and influential social network.

If your business is investing time and energy into Facebook, LinkedIn and Twitter management, you should be considering Pinterest too, especially in light of the following reasons.

Pinterest is a different breed of social network. It’s nowhere near as fast-paced as the others and it is primarily used as a search engine. That means that instead of people heading to Google to search for wedding inspiration, gift ideas or homeware lookbooks, they use Pinterest. For these kinds of visual searches, Pinterest is far more appealing to users than Google or even Google image search. 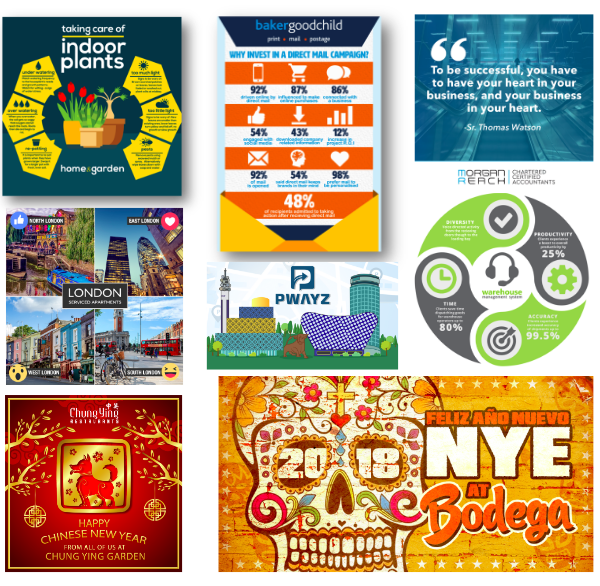 Pinterest could be the perfect place to show off examples of your work or infographics about your brand.

For some businesses, it’s patently obvious that having a Pinterest presence is valuable. However, even for more obscure businesses, it’s likely that your content will feature for some searches performed on the platform. Take a look at JC Social Media’s Pinterest account. There’s loads of material we can share about social media and social media management. Whilst the account doesn’t yet have thousands of followers, the reach and click metrics are promising for a B2B business.

Don’t get us wrong – Pinterest requires hard work to get set up and optimised and if you want to make the most of the platform, you need to be active. However, you don’t have to be posting new content regularly for Pinterest to bring you a lot of benefit to your brand – completely at odds with the requirements of other social networks.

Because of the way Pinterest is used, the content you share keeps getting visited and keeps adding value to you as a band. Whereas the half-life of a tweet is just a few minutes, pins are valuable for months or even years. What this means is that savvy marketers can front-end-load their time investment with Pinterest and reap the benefits for years with a minimal amount of input if they want to spend their time elsewhere.

If you’ve never used Pinterest properly, you’ve probably never seen the kind of reach metrics brands can achieve on Pinterest. Unlike platforms like Facebook that are squeezing organic reach out of brand pages, Pinterest rewards brands for getting involved. It’s not unusual to generate tens of thousands of impressions in just the first few weeks of setting up and optimising your Pinterest account – exactly what we can do for you here.

If building brand awareness is a key goal for you in 2020, Pinterest is the perfect place to start. It also makes a lot of sense if what you’re offering is unique and can easily be understood just by looking at it.

Reach and impressions will be the stand-out metric for you on Pinterest but it does also contribute to web traffic. All genuine web traffic is valuable to your business because any one of those individuals may choose to make a purchase, subscribe to your newsletter, refer you to a friend or share your content somehow.

It’s important to cross-reference your Pinterest data with Google Analytics. It’s likely that Pinterest will report a greater number of clicks than traffic referrals recorded in Analytics. There are several potential reasons for this, the details of which are beyond the scope of this post, but it’s likely that Analytics slightly under-represents the number of people who actually reach your site from Pinterest.

The traffic from Pinterest is renowned for being highly commercially valuable. In fact, Pinterest claims traffic from its site is around five times more likely to make a purchase than from other social networks. This is underpinned by the commercial intent users have when using the network – they’re not just looking for ideas and inspiration; they’re looking to buy what they find. Savvy marketers are leveraging this commercial intent to make sales.

Something that may come as a relief to some is that Pinterest isn’t typically an environment for trolling. In general, Pinterest is a positive experience for its users – they’re not going to see a political statement or a nasty comment that upsets them. This positivity passes on to businesses using the platform.

Comments are a part of Pinterest but it’s nowhere near as big an element as it is on Facebook or Instagram. There’s no real thing as a “Pinterest storm” because the platform just isn’t used like that. This is another reason why Pinterest requires less ongoing management than other networks – less community or crisis management has to happen there.

A fairly recent addition to Pinterest has been the ability of brands to advertise on the platform. This adds a whole new dimension to your approach and it means that you can easily scale your impact if you hit on a valuable market. Most marketers give paid advertising a go to see what return on investment they can achieve. If you’ve had success with Facebook or Google advertising, maybe Pinterest is the next source of new business.

9. Your competitors are still late to the party

The reality is that businesses are still waking up to the fact that Pinterest represents a very good value-for-effort marketing channel. For brands with any customer-facing elements or anything they can visually represent, it’s a no-brainer to spend a few hours getting set up and optimised.

If you think your competitors are already making Pinterest gains, stop giving them all the limelight! It’s time to wrestle back some of that attention by getting your content up alongside theirs! Maybe they’re not actively updating their profile and you can appear more prominently with fresh new content. If they are active, see if you can piggyback on their success by sharing similar-themed content.

There you have it! Pinterest remains a valuable social network that you should certainly consider adding to your online presence. The opportunity for huge brand reach and the high quality of the web traffic make it a potential source of good leads. With few downsides to getting set up, maybe 2020 is the year to get Pinterest sorted.