Developing and sharing content over social media is a powerful marketing tool for the modern business. There are, of course, many different types of content, each achieving a different effect on an audience. One of the greatest challenges for any leading social media agency is being able to reduce the ‘black box’ element of social media management. At JC Social Media, we have developed a simple model to demonstrate exactly what kind of content is going to be produced for our clients; Cook’s social media content matrix.

Social media content broadly falls into one of three types, or a combination of two or even all three. These are:

Typically, accounts being run by people and companies that don’t ‘get’ social media content will be far too self-promotional. Content will be more akin to a TV or radio advertisement – as value-adding (interesting) as possible, but blatantly just about selling. Here’s our content matrix with an example current and desired content blend. 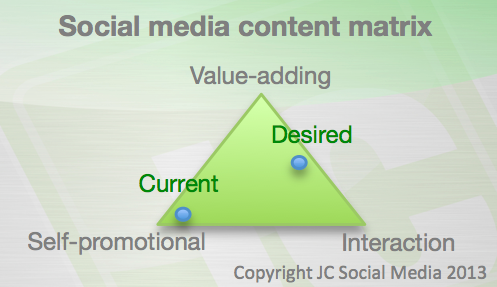 “Hey, @randomer take a look at our amazing 2 for 1 deal on our socks” is both interaction and self-promotional. Arguably, depending on how interesting the socks are and how great the deal is, it might be value-adding.

As a car manufacturer, posting a photograph of your latest model hammering it through the Swiss Alps will add value to fans and followers if they’re really into the cars. Asking them to guess exactly which mountain range the shot was taken in makes it more engaging, value-adding and provides a platform for interaction. Giving the opportunity for your fans to be right and to show-off is going to give them value from your account but allows you to put a great shot of your car out there without seeming too self-promotional.

The optimal social media content blend will vary wildly between industries and companies. Companies with a large offline presence, benefitting from individuals wanting to associate with the brand, can afford to be more self-promotional as they may be inherently adding value to their followers, regardless of what they post. This isn’t to say that this is good practice and is going to be the best strategy, but they will still achieve good fan and follower numbers and receive high levels of interaction.

For the majority of lesser-known brands, growing an online presence involves piecing together high-quality, storytelling posts that do not threaten the social sphere of the consumer who will instantly put their defences up if they’re being sold to. In order to grow the brand through social, shareability is the key, but for this, you need really value-adding and engaging material that captures the imagination.

“Content is king” is the age-old phrase when it comes to social media marketing and I’m sure it was coined by a marketing whizz. The truth is that social media content provides the foundation of a thriving social presence but that can only go so far, especially if you’re the owner of a lesser-known brand.

A wise man (Gary Vaynerchuk) once said: “Twitter is the only social media network, all of the other are content platforms”. Now, to the untrained, this might seem like a strange comment, but as a business, this is absolutely true. Only on Twitter can a business actively seek and interact with current and prospective clients and collaborators. Over other platforms, you can only interact once someone has interacted with you, i.e. if they comment on a Facebook post, for example.

Since Facebook has been the mother of social media for a decade, most companies’ first forays into the world of social media were on the Zuckerberg juggernaut. This meant that for most, social media represented another channel through which to distribute its promotional content to its fans and would-be fans. Sooner rather than later, brands realised this approach was met with a fairly frosty reception and the art of using a friendly ‘voice’ and value-adding content became far more important! 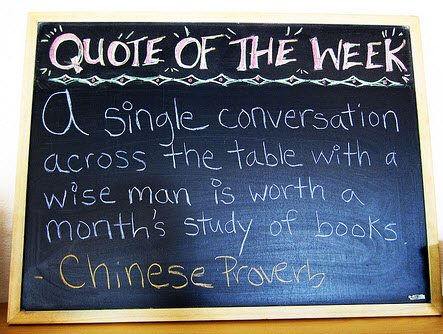 Suddenly, social media content became ‘king’ and everyone lived happily ever after… BUT, interaction, actual communication with individuals over Twitter, is an incredibly powerful function of the platform and one upon which many brands fail to capitalise. The opportunity for smaller brands, therefore, (who know what they’re doing!) is massive in both terms of growing the brand AND in actual lead and sales generation.

So what’s so wrong with self-promotion?

We’ve looked at how two-way conversational platforms that have millions of consumers conversing with friends, strangers and brands alike all in one place. It is simply not the place to apply traditional advertising techniques. Think about it from the consumer’s point of view – you’re a consumer at times, right? 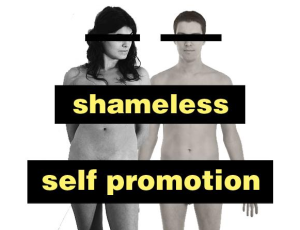 Most people are on Facebook to keep up with their friends and see what’s going on in the world. And cats.

Companies invade this space. Yes, they have chosen to ‘like’ your page, but this doesn’t give you licence to hit them with offers, promotions, new products or a statement about how great your company is. A ‘like’ is someone giving you a pass into their living room – value it! What about the people who don’t like your page – they won’t see these posts. This is precisely the point. Unless there’s a competition going, no one is going to share self-promotional rubbish over social media to their audience. This is exactly why companies resting on their ‘offline’ brand are particularly bad at growing their online audience.

So what, exactly, constitutes a self-promotional tweet or post? Anything that is more promotional than interaction and value-adding. Use the content matrix as both a macro and a micro guide. The blend of your content, where your blob sits in the triangle, should be on the right-hand side, but remember that this is an aggregate of numerous posts dotted all over the triangle. Some updates will be closer to the centre and maybe one in twenty posts might be way over to the self-promotional corner. The other 19 need to be at least as interactive or value-adding as they are ‘promotional’.

Essentially, our social media content matrix is a triangle, but actually; it’s a Reulaux triangle (very complex, we know). This is because it is derived from three interlocking circles, each representing the three type of content we can create over social media. Extending the content matrix, we can see how each type is defined and contributes to the matrix. See the image below.

You’ll notice that the centre of the diagram below is Cook’s content matrix. This is because, inherently, anything that you can possibly post over social media is, to some degree, a mixture of all three types; value-adding, self-promotional and interaction. Imagine the most non-promotional, interactive tweet to a follower of your company’s Twitter account. It is purely interaction, BUT, it has your company logo next to it (self-promotional) and it will be adding value to that individual follower, maybe others purely out of the fact a company is conversing with a civilian.

On the other hand, the most shamelessly self-promotional Facebook post can be responded to – it is up there for anyone to interact with. And given your company has genuine products or services to offer, the post is likely to offer someone some value if they’re in your target audience. It might even be so shameless it raises an eyebrow or makes someone laugh out of pity(!) 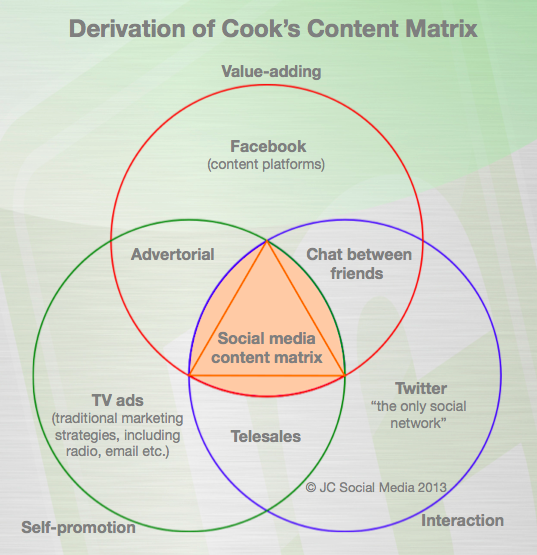 All the other ‘social networks’ (including Facebook) are content platforms. They enable the company or brand to enter the online social sphere of their target audience but only on Twitter can they be truly engaged and conversed with. Remember, you cannot force your Facebook page on your audience – you can’t post on individuals’ walls.

Self-promotional advertising channels have always existed without the scope to interact in a two-way relationship with the consumer. This is why there is a temptation to use social media platforms as another channel with which to bombard one’s target audience with corporate messages and promotional garbage. This also explains why some marketers are a lot more comfortable using Facebook (a content platform), rather than Twitter (a conversation platform). 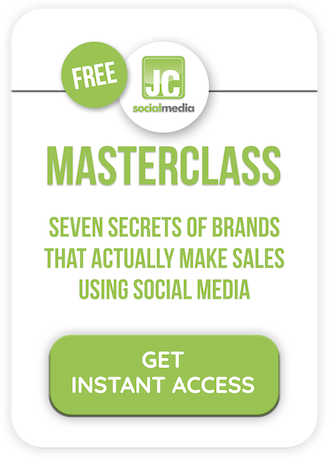 There are, of course, examples of channels that will fit into the space represented by the two overlapping circles of self-promotional and value-adding. Really funny or entertaining TV ads are going to be value-adding. Competitions and prize giveaways, likewise, promote the brand but add value to consumers by giving them a chance to win something. The same is true for advertorials; they’re providing information but are, equally, selling something. The self-promotion/interaction overlap, however, is relatively new in terms of a two-way relationship, most of which will fall into the central content matrix because they will occur over social media.

The best examples of traditional means of interaction are not marketing as much as selling. Telesales, door to door selling, car salesmen all require communication and sales skills but are very focused on a specific outcome – conversions – a one-way type of self-promoting interaction.

The ‘desired’ content blend is right on the edge of the green self-promotional circle – barely recognisable as self-promotion (probably no more than the logo sat next to the post) but sitting firmly within the red value-adding and blue interaction circles.

And, for your interest, what happens in the overlap between interaction and value-adding, naturally, has nothing to do with companies; it is outside the self-promotion circle. This is where a phone call between friends takes place. Even the most value-adding, interactive social media account (pure customer service) is going to be self-promotional as long as it has a company logo beside it.

The key is to think of social media content as the foundation of your strategy and online presence. Use it to amuse, inform and update your audience and it will grow – find or create something really shareable and you might grow it very quickly! We know that well-run competitions grow brands effectively as does effectively targeted Facebook promoted posts, but have you unlocked the power of interaction?