This is a guest blog by The Social Mediator.

We’re already in the aftermath of the great Scottish independence referendum of 2014 and many of us are breathing a great sigh of relief that sense has seemingly triumphed over delirious nationalism. There are some questions still to be answered like how did Mr Salmond get away with holding a referendum a) where ‘yes’ represented the independence option, b) where 16 and 17 year old children were allowed to vote and c) during the reign of an unpopular conservative government. But perhaps even more puzzling is that someone let Andy Murray anywhere near his laptop in the final days leading up to the referendum.

Up until the the 17th, the eve of the referendum, Mr Murray had obediently shown his support for the thinking man’s ‘no’ campaign and had remained relatively quiet on the matter. Murray fell into an interesting group of individuals who were seemingly representative of everything Scotland including other Scottish/British Olympic hero Chris Hoy and author-superstar J.K. Rowling. Murray has had a questionable relationship with the British media and fans after a number of eyebrow-raising comments and his ability to both win as a British hero and lose as a Scottish failure. Given his recent Olympic success and the fact he became the first British man to win Wimbledon since Fred Perry means a lot to the people of Britain, both north and south of the border. 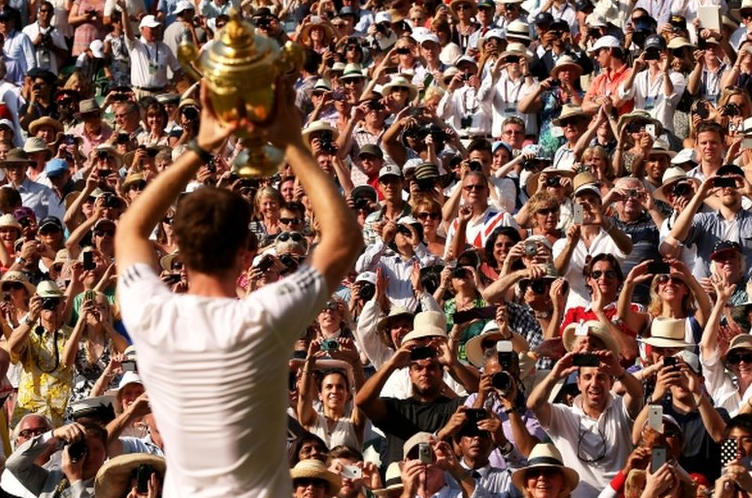 However, in what appeared to many to be a pre-planned reversal of opinion, Murray voiced his concerns over the ‘negativity of the no campaign’ in the days immediately preceding the vote and resolved to ‘do this’ indicating, I assume, he would vote ‘yes’. I’ve thought of Murray as many different things. A little bit moody. The owner of an unfortunate demeanour. Forthcoming with his opinion, a decent tennis player, but never stupid. But his eleventh hour “let’s do this” tweet has probably just about done it. Let’s look at the facts.

Andy Murray potentially had influence over a couple of hundred individuals, a few thousand less than when he tweeted before everyone else had made their mind up. What was he really going to achieve? The latest Ipsos MORI poll had confirmed that the ‘yes’ campaign had lost its momentum and showed support for the ‘no’ campaign at a comparatively lofty 53% – 6 points clear of ‘yes’. Flying in the face of the declining odds and committing his support to the other campaign was truly a stroke of idiocy. Did he think he was going to sway a couple of hundred thousand voters with a single, slightly ambiguous, tweet? 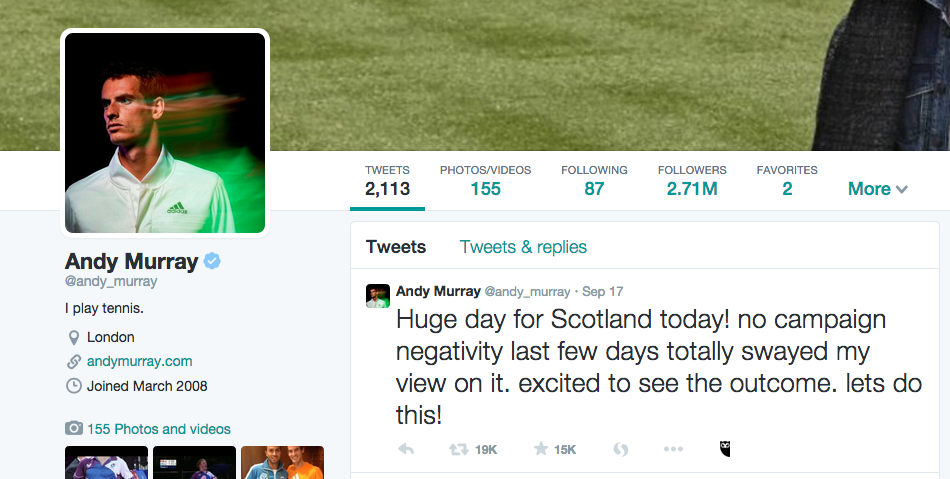 The negativity over the last few days? Really, Andy? If ever I’d seen a pre-planned tweet it was this one. Beside the fact that, to some extent, the ‘NO’ campaign to have an element of negativity in it as is was supporting the answer of ‘NO”, the last few days had been the least negative of the whole ‘no’ campaign. It included some of the best patriotic speeches we’ve seen in Britain for years; David Cameron spoke emotionally about his role as PM and Conservative leader and Gordon Brown epitomised everything about Scottish patriotism toward the UK. These were on the 15th and 16th respectively, right before Murray tweeted on the 17th. They were positively bouncing around with glee at even the thought of Scotland gallantly electing the UK as its life partner. I simply don’t buy the, ‘recent negativity’ comment.

But what damage has Britain’s prodigal son done? Making himself look like a grade A prat only scratches the surface. The task at hand? Repairing a self-destroyed reputation in time for Wimbledon, probably. Resumes please. Experience required includes reviving the dead and, ideally, time travel. I think we should all be in agreement that whoever was responsible for permitting Murray to make his final tweet needs the sack. Let’s do this.