The ROI of social media management for companies like yours

Companies part with hundreds of thousands of pounds on billboard advertising over a motorway and have virtually no idea of the ROI, even if the billboard company says 60,000 drivers pass under it every day. It’s great brand exposure, right?

We’re going to help unpick the mystery of the ROI of social media.

Like many other forms of marketing, there is an ‘iceberg effect’ (see picture) in terms of what we can measure and what effect we’re estimating. By no means is social media this mysterious ‘black box’ of digital marketing wizardry that some people would have you believe.

The potential areas of return from social media marketing are numerous. If you’re going to be hot on the tangible ROI of social media, define the goals of your activity and what those metrics look like. For the purpose of this blog, we’ll focus on some key indicators – at least some of which are likely to form part of your social strategy.

Measuring the ROI of social media

Using a combination of social media tools and Google analytics, here are some of the things we can accurately measure.

– Interaction with posts including clicks on links and images

– Purchases made directly from Facebook (using Shopify or alike)

– Handovers of leads from Twitter or LinkedIn lead generation campaigns

– Offer or voucher codes to be redeemed in store/online

– Where did you find out about us? field on online forms or other feedback

Take a look at our iceberg. Everything above the surface can be tracked and measured, whilst below the surface, metrics become increasingly difficult to measure. 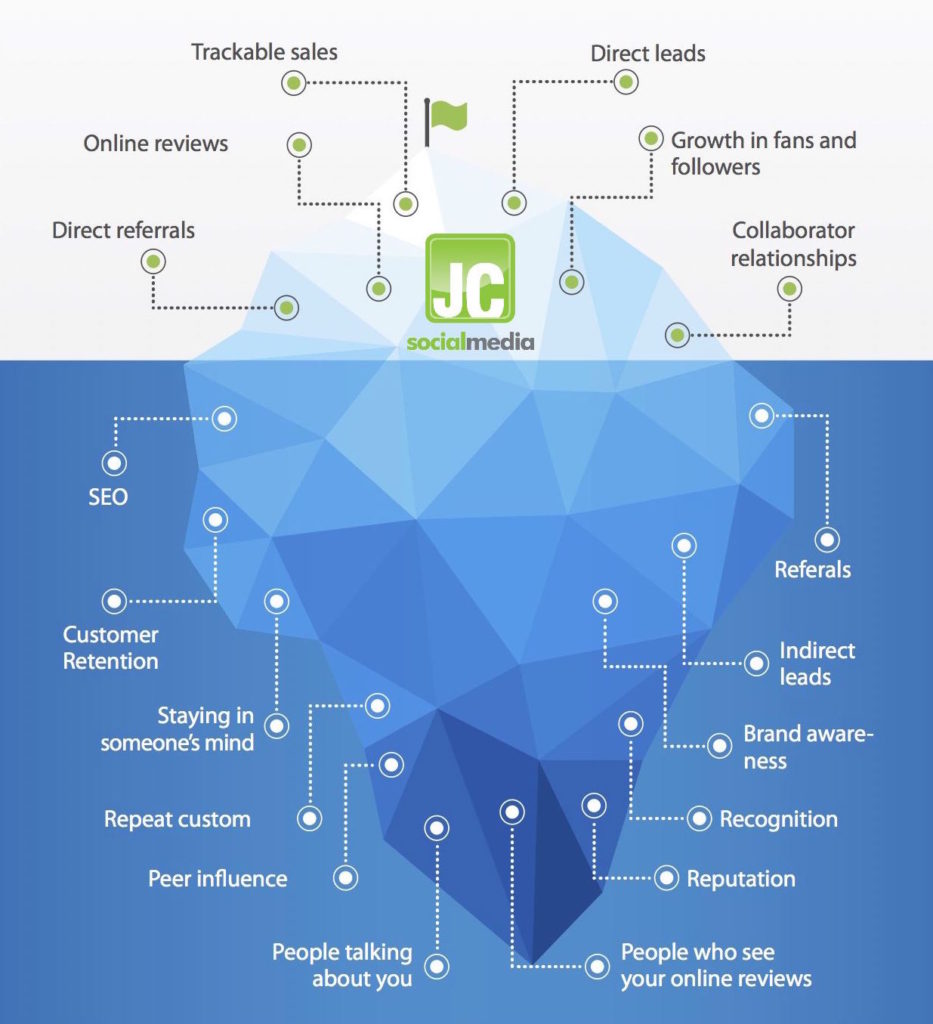 Remember, if you have data on your conversion rates for hits to the website and/or certain pages, you’ll be able to estimate the revenue generated from social media. Arguably, because of the targeted and personal nature of social media marketing, conversion rates should be higher from social media directed traffic. Recording what happened with leads handed over will give a very accurate indication of ROI as well as sales on Shopify sites. In terms of impressions and reach, these give tangible measures on what will ultimately be the rest of the iceberg. This is akin to billboard or newspaper advertising and the tracked phone numbers or codes help measure the ROI in these instances.

The rest of the iceberg – what lies beneath the surface – is going to be huge in most cases. This accounts for the increased brand recognition, improved brand perception and direct Google searches after someone, say, saw a Facebook post or tweet. What about existing customers choosing to repeat buy because they saw a post they liked or were simply reminded of the brand? What about the positive conversations which happen offline between potential customers and collaborators? How about the SEO benefits social media has but are difficult to measure?

What most companies (and even some social media agencies) fail to do is a) ascertain clear social media goals for their campaign and b) put the tools in place to be able to measure the metrics determined to be key performance indicators.

Once you’re happy that it is possible to measure the ROI of social media marketing, the next question is “how do I measure ROI?” If you have your Google analytics and sales data in place, measuring ROI is actually very straight forward. The difficulty arises when things aren’t so black and white – sure we can measure ‘brand awareness’ in terms of reach, but how does this equate to tangible return?

The truth is, as with any type of marketing, it’s not possible to translate everything into numbers. However, if we can demonstrate a positive ROI on social media purely from the tip of the iceberg, think about all the other benefits. That’s why our social media agency actually built its own reporting software, JC Social Stats, so we can show our clients exactly the tangible and intangible elements of what social media achieves through various metrics.

Below is an example of what our clients see at the end of each month, produced using our bespoke reporting software. As you can see, it looks a little like a Pinterest board, with each box providing a snippet of information highlighting areas of potential return on investment. Each client has their own key performance indicators and, therefore, reports are tailored to their needs, focusing on areas they deem important from a business perspective.

The fact that social media marketing occurs digitally means there is actually far more scope to measure the ROI of social media than most traditional marketing methods. The issue to overcome is that 10,000 leaflets are 10,000 leaflets and to traditionalists, they, themselves, represent tangible return on their spend, even before they’ve left the box! The problem for the traditionalists is that the market is increasingly unengaged with such forward marketing efforts like leafletting.

Don’t accept the excuse fro marketers that “you can’t measure ROI on social media” – that is a lie. A well developed and delivered social media strategy will create positive ROI and a reputable social media agency will provide reports to show exactly what impact is being made.