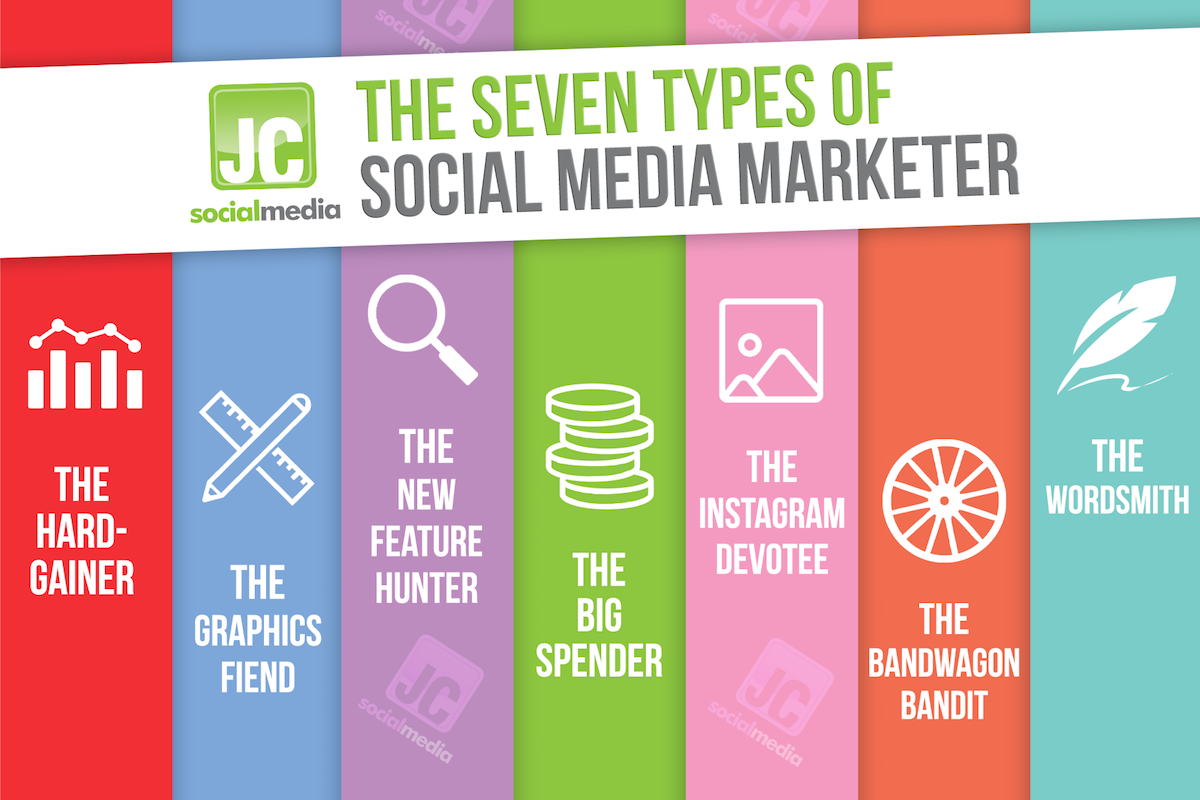 The seven types of social media marketer. Which one are you?

We’ve had a think about some of the extreme social media management tactics in the office and our network. We’ve been able to identify seven key categories of social media marketing philosophy. Which one do you think most represents you?

Slow and steady wins the race. You pore over the case studies and analyse the data. You have a master plan laid out in a spreadsheet with eight separate tabs. Every new like is a cause for celebration. World domination is just around the corner. Besides, you’re not lining Big Zuck’s pockets for the sake of it – Facebook’s free for a reason.

Words, smurds! Great visuals are the only thing that matters. Photoshop and Canva are your weapons of choice and you wield them fiercely. You’re a graphic designer in social media manager’s clothing but that’s what great content is all about, right?

You’ve got an eye for detail and every new update released is an opportunity for more exposure. You keep your finger on the pulse and know about features before they’re even released, drafting potential copy, headlines and graphics at every turn.

You’ve pretty much given up on mastering the algorithm and creating thumb-stopping organic content – you can make the numbers work so you splash the cash. With a well-crafted Facebook ads funnel and some tried-and-tested headline, copy and image combos, you’re away. Your blood type is ROI positive.

Instagram is where the money is, make no mistake. Right now, it’s the only platform that matters. If you’re not on Instagram are you even on social media? You optimise everything for the Gram and syndicate it, unabridged, through every other social network your brand has, hashtags and all. You’ve lost half your Twitter following but who cares about that?

You’re not just on the bandwagon, you’re cracking the whip! Every trend is an opportunity for maximum exposure and “shoe-horn” is your middle name. You describe your work as “responsive” and “dynamic” as you “give the people what they want” and “feed the fire”.

Short and snappy is so cliche. That English language A-level is not going to waste – your copy is world-class. People WILL read an entire blog post in your Instagram caption – it’s just that compelling. A picture paints a thousand words, so use a minimum of a thousand words for every picture.

Yes, this is just a bit of fun! If you have any more suggestions for the list, let us know.