The six types of Facebook fan and why they matter

on Nov 4, 2019by Adminin Graphic design and content, Social media

For large brands, a strong content game and some well-thought-out PR campaigns will help proliferate their existing online influence. Leveraging celebrity ambassadors and other marketing activity compound their social media efforts. Lesser-known brands in competitive spaces have a hard job standing out and gaining traction. In fact, if you’ve just launched a page you’ll know it is painfully difficult to gain a following.

But there are several tactics brands employ to attract new fans, each comes with its own cost/benefit tradeoff. In this post, we’re going to look at six different types of Facebook fans and the tactics that are used to get them. We’re going to assign a cost and a value to each of them too. Read on!

Many of us long for the Facebook follower base of household-name brands. What we could do with a million fans hanging on our every word! But it’s not just the audience itself that is valuable – it affects how a brand is perceived online. Whilst we might not have a genuinely global brand in a traditional sense, we can at least build a large social media following and benefit from looking the part.

There are two benefits to having a large following on social media. The first is that your followers represent an audience of people that have associated themselves with your brand and have, in a way, subscribed to see your content. This certainly has a meaningful benefit to your brand (if those fans are all real, of course!). The second is that having lots of followers creates a perception of popularity and authority online. This is a more superficial avail but one that still holds value.

Both of these factors play a role in influencing your audience’s decisions so it stands to reason that a brand should pursue a strategy of gaining followers.

Not all followers are created equal

Whilst the absolute number of followers is what matters for that initial, instinctive evaluation of the size and influence of a brand, the true value of these fans as an audience for the business depends on the quality of these followers.

Different tactics can be employed to generate page likes. The methods used impact the quality of those Facebook fans acquired. This means there is a cost-benefit tradeoff for each of these methods, so let’s take a closer look at them.

Buying followers is still a thing for almost every social network and it remains the fastest, cheapest and least-hassle method of going from 10 to 10,000 followers. Facebook is no exception. But they won’t help your brand in any other capacity than to swell your numbers. They’ll likely drop off over time or in one fell swoop as platforms cull the spam accounts. This is the one method on this list that violates fair use of platforms as it is a brazen act of manipulation.

A popular tactic to obtain real Facebook fans is to run a like campaign to a global audience that has a general interest in what you do. These will be genuine likes from real accounts who have consciously chosen to like your page. However, you’ll likely achieve lots of likes from poorer countries where likes are less competitive and, therefore, cheaper. Facebook works to maximise results per pound spent so it will find the cheapest likes available within the bounds of the audience targeted. There is a small chance these individuals will engage with future content but they’re unlikely to ever become customers.

Followed for a competition or giveaway

Followers obtained from running a competition or giveaway on a Facebook page are more valuable than the previous two. Whilst it is the most fickle of organic page likes, it gives you a chance to get in front of someone and build rapport. Ensuring entrants must be in your target location, the UK, for example, increases the likelihood of them actually becoming a genuine fan or customer later down the line.

Cost: The cost of the prize and the cost of organising the competition. Results vary wildly on the quality of the post and the value of the prize.

Value grade: C+ – many will fade away but some you’ll be able to bump into a higher tier.

From a more specific ad campaign

If you’ve run any kind of ad campaign directed at an audience in the right demographic, location and with the right interests AND they’ve chosen to like your page, there’s a good chance they’re generally interested in your brand. It depends on the nature of the ad campaign but these followers could be very high quality and commercially valuable.

Cost: Anywhere from £0.10 to £0.50 after optimisation. Depends on the nature of the audience.

Value grade: B – hard to pin down exactly what the commercial value will be, but on the whole, there should be good value here.

These are followers who have developed an interest in your product, brand or content. This could have happened in many different ways. This also includes friends or family members you’ve invited or have been recommended to like the page. These warm connections have more value. 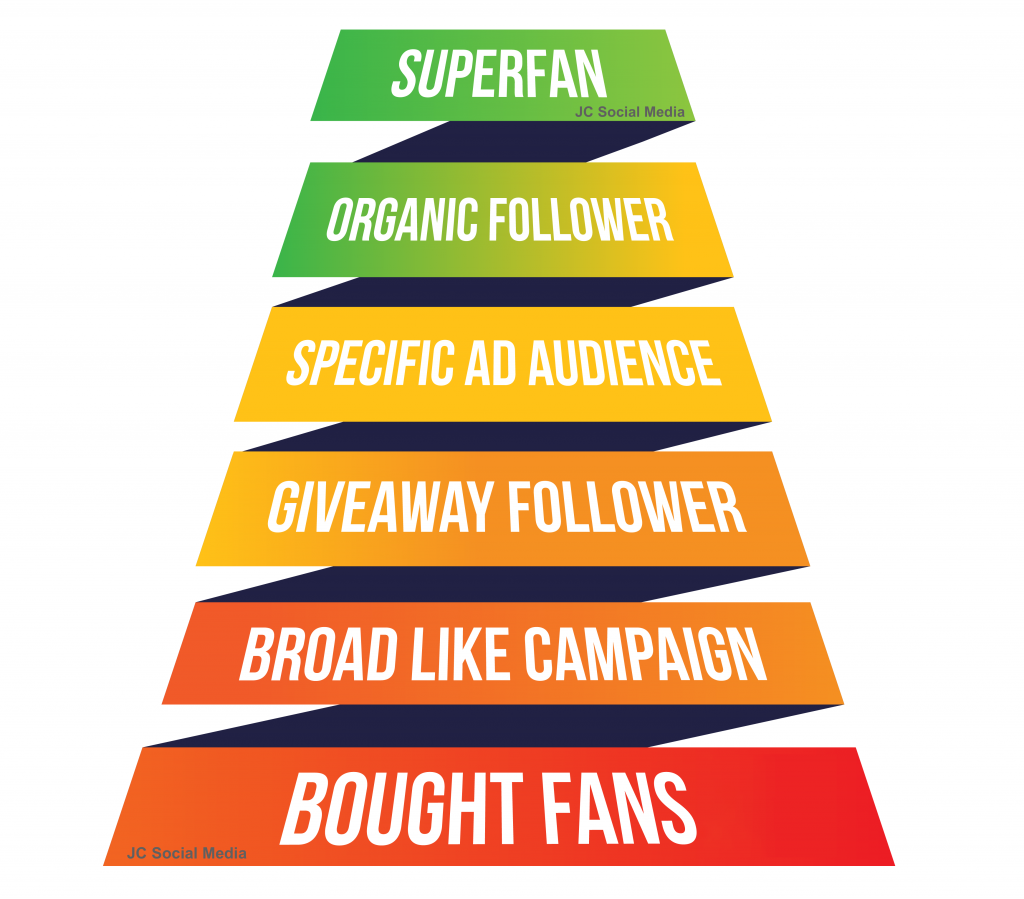 Cost: The cost of producing high-quality content and managing your brand online.

Value grade: A- – generally very valuable individuals but there’s still some work involved to turn them into customers.

These are die-hard fans with a deep personal affinity towards the brand. They’re often happy and loyal customers and they may regularly engage with your content. Superfans usually represent a very small proportion of a page’s Facebook fans but they’re often responsible for a lot of page activity and the early traction of a post.

Cost: As above, plus the time it takes to build strong relationships.

Value grade A+ – this is the holy grail of Facebook fan. Their value should not be understated, even if they’re not your biggest customers – they’ll help win you new business.

So do people still set store by fan and follower numbers?

The short answer is ‘yes’ because this is still used as a proxy for an account’s influence. But it is a flawed proxy. There are businesses whose income model is almost entirely based on the perceived influence of their social media following. No wonder these accounts have developed myriad ways to inflate them.

People have become more skeptical about fan and follower numbers because they can be and are so easily manipulated by people and brands feigning or at least exaggerating their level of authority or influence.