… and the WORLD FREAKS OUT.

No longer do users have the chance to click the star under a tweet (which turns yellow) but the option to click a heart (that turns red). Oh, the audacity.

The world is freaking out right about now due to this small but significant change that happened all of about an hour ago. As far as we can see there is virtually no change in the functionality of the button other than they are called ‘likes’ rather than ‘favourites’. You now have a list of ‘likes’ to read back over rather than your ‘favourites’. 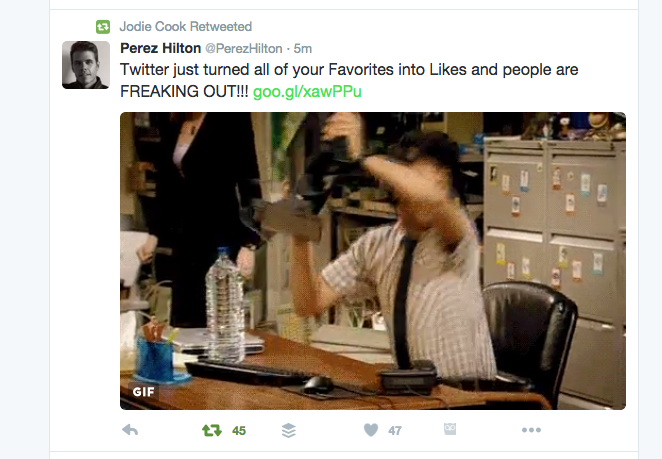 This is precisely what happened in our office.

We’re all over the place here; no idea what to make of this red heart malarky.

As to why Twitter has changed its favourites, we are still in the dark. It was a nuance that helped define the platform, now it’s virtually the same as everything else in existence. Marketers everywhere are having to change their content so it doesn’t read like it’s October 2015.

There is certainly a difference between the meaning of the word ‘favourite’ and that of the word ‘like’. I mean, ‘like’ is pretty weak, if we’re being honest. I ‘like’ a lot of things but I wouldn’t say I had a lot of ‘favourites’. Will we see more people saying ‘yes, I like this tweet’ than we did ‘yes, this is one of my favourite tweets?’ – very possibly. It won’t take long to see the impact this has on interaction and engagement of tweets but we hypothesise it will increase it.

But this is quite cool:

Yes, you can download a Twitter extension so you can set your ‘like’ image to be whichever emoji you choose. Amazeballs. And here’s how you do it.

And now for the question virtually none of you have been thinking about:

What does the ‘favourite’ to ‘like’ change mean for brands?

Let’s be honest, it might increase engagement in the ‘like’ department but it’s never been a game-changing feature (no matter how many digital marketing ‘experts’ tell you it does). Don’t pay anyone to come up with a ‘Twitter like strategy’ for you. Or if you do – I have lots of things to sell to you.

What does it actually mean when someone favourites your tweet? We’re going to have to change this blog now too! FML