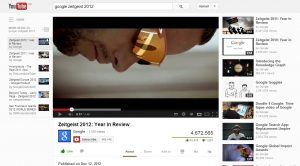 Among the new features is a drop-down list of search results that stays on screen no matter how many videos of cats you watch.

Back in December 2011, video sharing giant Youtube underwent the biggest website redesign in its history as it introduced the concept of ‘Channels’, making it easier for users to subscribe to and watch content that interests them.

Alongside this, the redesign was also used as an opportunity to align the site more closely to the visual style of its parent company, Google. Part of this naturally included close integration with Google+, which had been launched a few months earlier, though they also made it easier to share videos through other social media platforms, ensuring that Youtube remained the number one choice for users.

Well, one year on and Youtube has just revealed yet another website redesign. Whilst not as significant as the 2011 refresh, there have been a number of changes. Changes that the Youtube team hope will enhance the user experience.

At a first glance, it would appear that all that they have done is to take all the components of Youtube and move them all around on the screen. Video titles now appear beneath the video rather than above; and the control panel that contains video information, statistics and sharing options has also been reorganised into a layout that feels more familiar to Google users. However, more substantial changes have also been made elsewhere.

The front page has been freshened up, with a home feed that displays not just uploads from channels you’re subscribed too, but also recommendations based on what you have been watching. It’s also now much easier to filter your feed and manage your subscriptions.

The biggest (and most important) changes, however, concern the panel on the left-hand side of the screen. The Channel Guide (which shows you the latest videos from your favourite Youtubers; what you have saved under “Watch later”; your viewing history and your latest recommended videos) is now present on every single page as an initially discreet icon that unravels down the page at a single click.

My favourite part however is the icon that sits beneath the Channel Guide. All too often I have searched for a video, and not knowing which one I want, have had to either open multiple tabs or constantly go back and forth from my search results. Now, if you search for a video, the search query will follow you around as you view video after video. This means that if you initially search for a video lecture on quantum physics, and somehow end up watching a video of a cat staring into a washing machine, you will be able to get back on-topic at the click of a button.

Though subtle, the changes that have been made to Youtube makes searching through the video juggernaut’s databases significantly easier. Of course, the big hope is that the refresh will encourage more people to utilise the channel subscription tools, and if you don’t already, I’d encourage you to give it a go – you’ll be amazed at what you might discover.